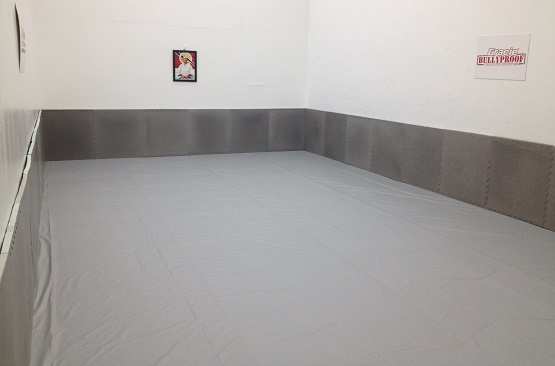 tarp he recently purchased to cover floor mats in one of his training studios.  Jeff says "We got the tarp installed yesterday. It fits and looks great!”  This particular tarp was finished with sewn Velcro strips all along the bottom edge.  We also delivered the opposite side of the Velcro which has an adhesive backing to allow Jeff and his team to affix this to the floor mats to create a tarp cover that won't move around but can still be easily removed for cleaning or replacement of the mats.  This sort of heavy duty mat cover is ideal for karate, Judo and Kung-Fu studios as well as wrestling mats and other gym floor applications.

In addition to covering the floor, tarps can also be added to padding on the walls to protect against injury.

Here is another photo of a multi-colour tarp made for Revolution MMA & Fitness, a mixed martial arts studio in Toronto. The three red squares make it easier to divide the students into groups.

Covering floor mats with tarps makes the environment safer since students don't trip on the seams between the mats and it also saves money because the mats don't wear out as quickly. The solid surface is also easier to clean than individual mats.